Kiith Soban are a highly respected force within the Northern Coalition. Although their tactical prowess is renowned, it is their ability to leverage advanced military technologies to deliver devastating long-range attacks, disrupt enemy movements, and manipulate the battlefield that has made them one of the most effective fleets to enter the battlefield in years.

This fleet pack will add the new playable fleet, Kiith Soban, to multiplayer and skirmish modes in Homeworld: Deserts of Kharak.  The Soban Fleet includes an all new CARRIER, RAILGUN, BASERUNNER and BATTLECRUISER, as well as unique Soban textures for all units and new Soban Carrier Captain voiceover and processing for just $6.99.

This classified dossier is part of an official inquiry into the Kriil Engagement involving a Soban carrier group going up against a Gaalsien fleet out near the Tarsis Line. It contains an interview with a Soban First Officer that dramatically sheds light on the incident, the Soban’s unique abilities, and the prospective strategies one will either battle against or employ in future multiplayer matches. The fiction itself mirrors real-life matches and techniques. 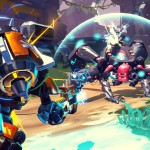