This week’s Community Badass is none other than @Klopotinsha! We featured her on the Gearbox Community Round-up blog post last week and decided it was past time that she be Community Badass as well. Whether you’re familiar with her amazing multimedia art presentations or not, read on and be amazed!

Well, if we consider Borderlands only as a separate video game series, I put my paws on it at December 2013…

But I actually prefer to consider it as a stratum of culture, philosophy, science fiction and specific interdimensional direction of modern mythology based on literature of 20th century… So I date the beginning of this journey for myself by late ’90s. It was amazing to observe through all these years how the ideas that originated in the earliest projects by Gearbox began to turn into something really great and especially to the mid ‘00s. What more can I say, I wouldn’t be here today if the old school didn’t pave the way.

What is it about the series that has you hooked and keeps you coming back?

I finally found the cornerstone, the perfect social satirical science fiction space futuristic setting that stands on the frontier or even erases borders between all my favorite worlds I’ve seen before. I love the original Borderlands from the first minutes as the very same game that I began to dream about when I was just 7 years old. I just couldn’t leave it when all this cynical social experiments have started. I just needed to be sure that this mockery will be finished honorable way… Or even had to DO something to care about those who have been deprived and betrayed.

But I actually prefer to perceive it a bit differently. I mean, I can’t even call my favorite one a character. I love the whole setting, the whole planet Pandora and all amazing creatures living on it.

And of course to feel the beauty of the universe I need a point of view. So I ruthlessly use Mordecai as alter ego to explore this interactive model of the universe. Because The Hunter is perfect Archetype for me and Mordecai is a special one. One of the oldest characters of Borderlands and The MOST AWESOMEST BADASSES on Pandora! The character that is able to think and feel, discoverer, the keeper of the legends, who will never forget how borderlands was looking at early development stages…

And it’s so awesome to take under control an artifact, charged with so many beautiful human souls, I mean all the artists who worked on Mordecai’s design, great sculptors who made all these models and, of course, the actor Julio Cesar Cedillo, whose voice works also like facial animation on Mordecai, causing work of player’s imagination… so the character with hidden eyes appeared alive thing with very expressive and thoughtful look, and I found through his look in this tale much more sense than just shoot and loot.

I take my hat off to writers and psychologists who found the perfect allowable degree of roleplaying versatility without losing personality of the character.

I really enjoy that Mordecai doesn’t have any supernatural psionic powers and even not so interested in using elemental weapons, because it is so awesome to be just a honest human! With super badass power of human brains! Funny, but it’s kinda exotic thing these days… I like exotics. And I like birds.

Any funny stories or specific memories from your time on Pandora?

One does not simply walk on Pandora without generating funny stories and specific memories!

It’s a magical place… where any awkward movement can pull behind itself a whole chain of incredible events: from simple “Lerooooy” situations to completed dramaturgical performances.

By the way, the soldier also has a very interesting point of view, but I could have never understood it so deeply without my best friend. FRIENDSHIP IS AWESOME!! And it’s awesome that it always becomes the main moral of Borderlands stories.

I think it’s wonderful that we were able to go through all of these together in co-op.

We also had a lot of funny and delirious adventures as Axton and Zer0.

Who knows, maybe someday these tales will deserve some illustrated adaptations from me. Of course, I was as the thing with a clock face, and I think that Commando’s ex-wife must be actually very nice woman. And when we walked through Tales-from-the-Borderlands it was neat that we used only one computer by turns and our heads were staring in one direction. Hmm… If to put all songs and stuff from my Way of the Hunter and Telltale’s Tales from the Borderlands in chronological order it turns out like another interesting dialogue.

I’m glad, that Telltales and Gearbox have made a right decision and smashed that annoying Babylon right on Pandora exactly like on my concept!

Oh, it is amazing period of incredible adventures. I don’t know if I can briefly describe almost 50 years of life of the character, I experienced during just two years of my own life. I have drawn my first arts just to express my delight and good mood, but this Way led me much further than I could expect. I decided to cram into Mordecai a piece of my own soul and hope it stuck.

Time heals festering stinking wounds, turning them into sexy scars. But defeated disease won’t cease to remind of itself like phantom pain in missing limb…

You can guess that I’m talking about Borderlands2 that I call the dark era of moral and spiritual decay. It was a time of suffering and deprivation, mislead information and provocation. It was so painful to watch how all my favorite things fade into the dust and into ash, but I was not giving up and I began to tell my own illustrated legends, from the point of view that above deceit, to restore justice and protect Borderlands against Babylon.

It is important to understand, that “Vault Hunters” is not the ones who open the Vaults and defile alien culture, but the ones who appear at the right time in the right place as the guardians who protect the worlds they love.

By the way, I’m very grateful that you have mentioned in the blog about “multimedianess” of Way of the Hunterseries. The soundtracks and other stuff you can find there is not less important than illustrations, because I’m doing all this first of all for telling the tales. And I want it to be interactive and exciting not only for myself but also for others who can find it. I have only one pair of hands and not so much time, so i can’t make a video game for the time being, but I think I can count on the viewer’s imagination. So I want you to listen and gaze… And when it comes to that fantastic note where the rabbit bites its own head off, I want you to throw that f’ckin radio into the tub with me!!

And that’s how I play the games!

In near future I will have to release another illustrated thread to tell about thorny way of another point of view in face of two characters from far away, that leads directly to Pandora and possibly Borderlands 3… I mean the version of the universe with continuation of the story that I began to discover through Way of the Hunter.

What are you most looking forward to seeing from Gearbox in the near future?

Maybe I just want to see again that very shine I saw in Randy’s eyes when he was talking about true Borderlands in 2008 — about action, exploration, discovering and learning It was a real magic.

Yeah, I know that every great magic trick consists of three parts or acts, but in these silly tricks when bunch of shoddy comedians just kills the bird and waste so much time around some boring office plankton, there is no magic.

Anyway I want to congratulate Gearbox. They did what Valve could not — they brought the second numbered game of their main series to the epilogue and finally finished it. Now they need to think seriously about how they are gonna perform the Prestige.

I also learned the rule “If you want a thing well done, do it yourself”. Don’t mind if I do. Creating things is much more interesting than just consume ready product.

So if Gearbox will be busy with Battleborn for a while and even will make a new add-on for Duke Nukem Forever and ever and ever, I’ll be glad, because I need some time to finish my own plan around Borderlands…

Where can people go to check out more of your amazing work?

This is my public page on the social network made especially for watchers
//vk.com/klopotinsha_public – all hilarity starts here! ^_^

All the details of Way of the Hunter series you can find and ask in my Gonzo journalistic thread on official Gearbox forums //forums.gearboxsoftware.com/t/way-of-the-hunter-borderlands-art-series-by-klopotinsha/3264/58?u=klopotinsha (I actually would like to pay attention at the last event)

Here is a version of Way of the Hunter series at Telltale Games forums https://www.telltalegames.com/community/discussion/93990/way-of-the-hunter-borderlands-art-series-by-klopotinsha

You can also find all illustrations at the dump of deviations //karinakruglova.deviantart.com 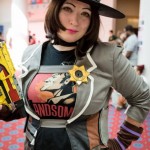