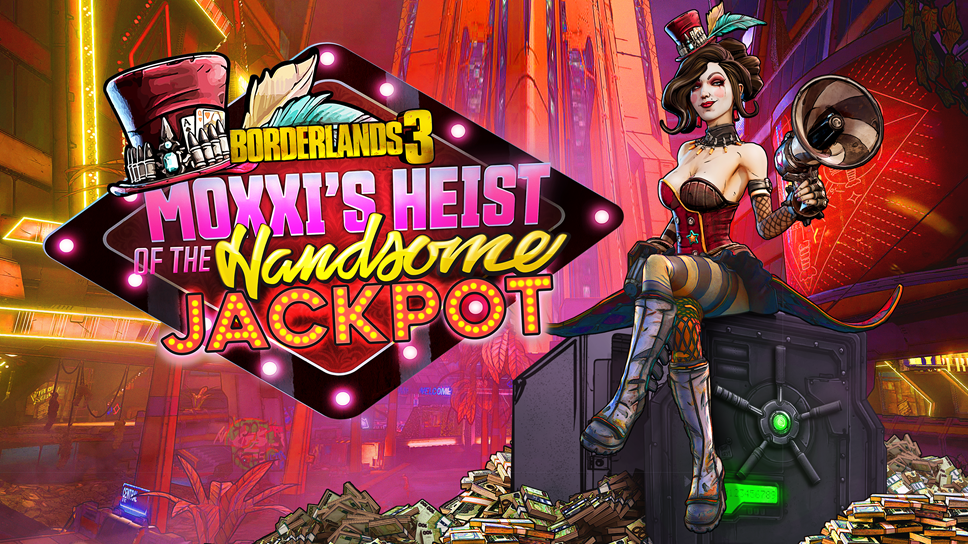 Moxxi’s Heist of the Handsome Jackpot will launch on December 19. Story DLC, next patch, Free Weekends, and more detailed on episode three of The Borderlands Show.

Get ready to go all in, Vault Hunter. Moxxi’s Heist of The Handsome Jackpot has been officially revealed as the first campaign add-on for Borderlands® 3, and it’s slated to launch on December 19. During episode three of The Borderlands Show, regular hosts Greg Miller and Fran Mirabella were joined by Gearbox Studio Head Randy Pitchford to delve into the details of this casino-raiding caper. You can catch the new trailer right here.

In short, Moxxi’s recruiting you to seize control of a derelict space station built by the infamous Handsome Jack back when he was still President of the Hyperion corporation. The Handsome Jackpot is quite possibly the gaudiest gambling spot in the galaxy, with neon signs, slot machines, and gold statues all over the place. It’s also crawling with multiple models of deadly Hyperion Loader Bots, as well as lunatic looters who’ve been trapped on board ever since Jack’s death. But that’s not all:

Moxxi’s Heist of The Handsome Jackpot is tuned for characters who are at least level 13, but will automatically scale up so that higher-level Vault Hunters can find a challenge and appropriately powerful loot. In order to access this content, you’ll need to have unlocked Sanctuary III, your space-faring home base that you reach at the end of the campaign’s prologue. For more information on Borderlands 3’s first expansion, just click right here. And to download brand new screenshots and key art, please follow this link.

As a reminder, Moxxi’s Heist of The Handsome Jackpot is the first of four DLC packs in development for Borderlands 3, and is included in both the Season Pass and the Borderlands 3 Super Deluxe Edition. If you’d like to try before you buy, you can check out Borderlands 3 for free on Xbox One and PlayStation 4 for a limited time from November 21 to 24.

Though Borderlands 3’s first campaign add-on doesn’t launch until December 19, its next free content update drops imminently. Both Takedown at the Maliwan Blacksite and Mayhem 4 are being introduced in this next patch, giving veteran Vault Hunters more ways to put their skills to the test.

Takedown at the Maliwan Blacksite is a brand new raid-style challenge tuned for coordinated co-op parties of four max-level characters, with restricted respawning to make your opposition that much deadlier. The all-new Mayhem 4 puts a spin Mayhem Mode by removing all player penalties and instead applying just two random modifiers: one that applies a bonus to players and one that applies a bonus to enemies. It also offers its own exclusive batch of Legendary gear that will only drop while Mayhem 4 is enabled.

As discussed on today’s episode, this patch also brings all of the following changes:

We’ll be showing off more of the action and adventure you can expect in Moxxi’s Heist of The Handsome Jackpot as we approach this add-on campaign’s December 19 launch date. We also plan to share the patch notes in full once the patch has gone live. Until then, you can find additional Borderlands 3 assets and information at newsroom.2k.com and borderlands.com.