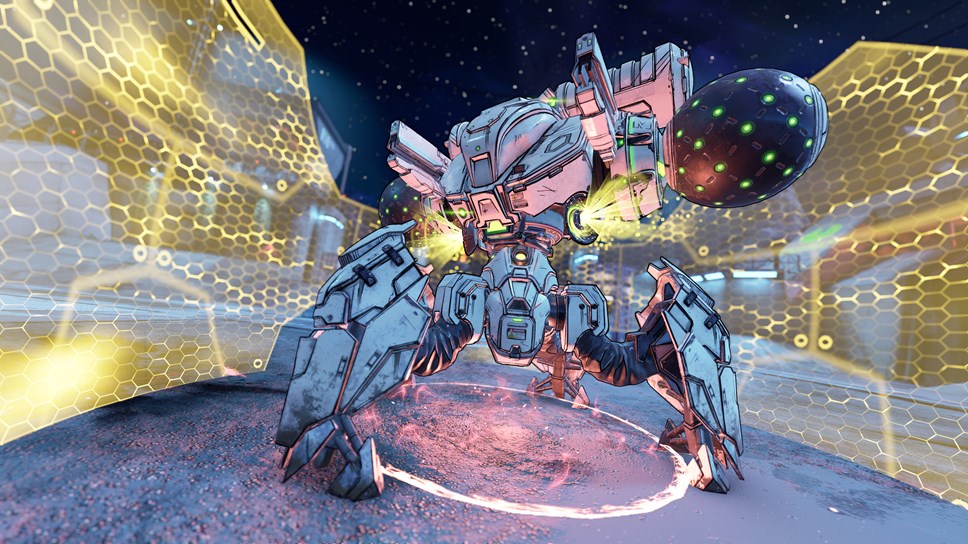 Your first look at Takedown at Maliwan’s Blacksite, the new endgame content coming to Borderlands 3

Episode two of The Borderlands Show premiered earlier today on Twitch and YouTube, and with it came some major reveals.

Our regular hosts Greg Miller and Fran Mirabella of Kinda Funny were joined by Head of Gearbox Story Group Randy Varnell to dig into a spoiler-heavy discussion of Borderlands® 3’s narrative, share impressions of the ongoing Bloody Harvest event, take a first look at the free upcoming “Takedown at Maliwan’s Blacksite” endgame content, and reveal a SHiFT code for the Spooky Surprise that closes out the month-long Borderlands Anniversary Celebration.

For the fifth and final week of the celebration, all players can redeem a time-limited SHiFT code to claim four creepy Vault Hunter heads, one for each of Borderlands 3’s four playable Vault Hunters. You can claim these brand new cosmetic items by redeeming the code below on Borderlands.com, on the Gearbox SHiFT site, or via the in-game Social menu in Borderlands 3 before the code deactivates on November 5 at 12:00 a.m. Pacific Time*!

In addition to sharing this SHiFT code, episode two of The Borderlands Show also contained the very first footage of Takedown at Maliwan’s Blacksite in action, as well as a host of additional information. Like the ongoing Bloody Harvest event, Takedowns are free add-on content for Borderlands 3, but unlike the time-limited seasonal events, Takedowns are permanent additions designed for four-player co-op at level 50.

In Takedown at Maliwan’s Blacksite, Lorelai – who helped lead the charge against Maliwan’s troops during their attempted takeover of the Atlas corporation on Promethea – is asking you to take the fight directly to Maliwan with a preemptive strike on one of its most secure facilities. Attacking Maliwan, with its seemingly infinite army of soldiers outfitted with highly advanced tech, may sound like a suicide mission, but hey, you’ve survived plenty of those before.

Takedown at Maliwan’s Blacksite will be coming to Borderlands 3 on November 21. For additional details about its unique enemies, rewards, location, and more, you can catch episode two of The Borderlands Show on YouTube right here or read the episode recap here. For some fresh screenshots, you can click here. To learn more about Borderlands 3, visit borderlands.com or newsroom.2k.com.

*Offer good until 11/5/19 AT 12:00 AM PT or while supplies last. Limit one per person. Must be 18 or older. Void where prohibited. For complete terms, visit https://borderlands.com/borderlands-3-spooky-surprise-terms